Lewis Road Creamery: FernMark is melting the hearts of butter lovers in the US and Australia

Dairy might be by far our biggest export but ask a consumer in Australia or the US what they think of New Zealand butter or milk and they will look a little blank. Lord of the Rings, yes. The All Blacks, yes. Pristine lakes and mountains, yes. But butter? 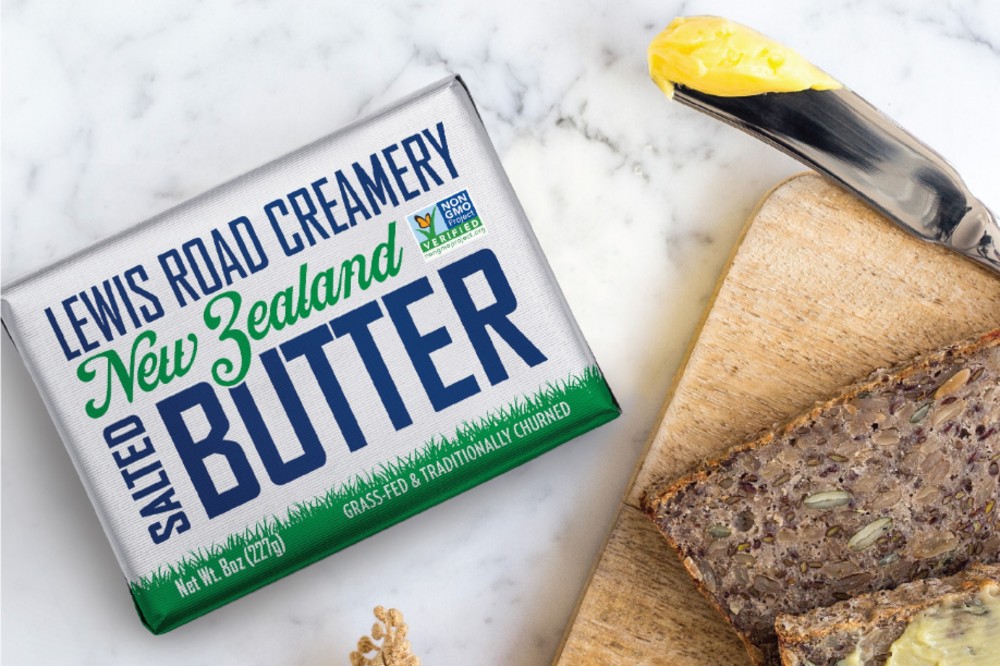 Turns out most of our dairy is destined for other people’s brands, not sold direct to consumers. Think of us as ingredient suppliers: reliable, delicious but otherwise invisible to consumers shopping supermarket shelves.

So, when Lewis Road Creamery launched in both the US and Australia, the much-loved Kiwi dairy brand decided to promote its New Zealand origins and proudly attached a FernMark to its packaging.

“Consumers in the US didn’t have a clear understanding about New Zealand as a food producer,” says general manager Nicola O’Rourke. “But they do understand us as a country. Standing in-store sampling butter with consumers, as soon as we pointed to the silver fern we got some degree of recognition. To them New Zealand, and the silver fern, represents quality, purity and trust.”

The strategy is working. The company started selling its butter range through the beachhead stores Central Market (Texas) & Erewhon (California) in 2019 and now have national ranging in Wholefoods which will see them expanding nationwide, getting fans and followers as far afield as New York and Cincinnati. “We asked consumers what they would think a typical New Zealand farm would look like and based on what they’ve heard and seen in the media they’d say words like clean, green, Non-GMO, and of course Grass Fed.”

Which is kind of lucky because that’s exactly what a New Zealand Lewis Road Farm is.

In the US there is a growing awareness of the dietary value in ‘good fats’ and these consumers are looking for a trusted, GMO-free source and prepared to pay a premium for it. As we are now rolling out nationally in Wholefoods in the US, it remains critical that we are communicating “We’re made in New Zealand and proud of it.”

The launch into Australia in late 2019 followed a similar path with the FernMark helping win coveted shelf space in Woolworths. Nicola says the nationwide chain was looking for ways to add premium dairy products to a traditionally low-cost, commodity aisle. That could have come from Europe or the US but having a locally sourced story was important for consumers. Coming from New Zealand gave Lewis Road an edge.

“Again, the impression is that New Zealand is clean, GMO-free and has a close relationship between the food growers and the food brands – and it’s perceived as local, so they can trust the supply chain."

"The FernMark as a symbol of New Zealand origin becomes the clincher, the final mark that is the real deal."

That’s music to the ears of New Zealand Story’s Sarah Morgan who says New Zealand exporters are sometimes unsure about promoting their origins across the ditch. “Some have a perception that Australians don’t want to buy New Zealand made. But that’s not true,” she says.

The proof is in Lewis Road’s tasting. It’s in 950 stores across the country; social media response has been incredible and, just as it was here, there’s a resounding call for more of Lewis Road’s products, especially the chocolate milk.

Nicola encourages other food producers to sport the FernMark. “Not many countries have a mark they can be proud of,” says Nicola. “As a nation, we’re quite young in developing our consumer brands; the more exporters we have using the FernMark, the greater the groundswell of recognition for trust, quality and a secure supply chain. That can only be good for New Zealand.”

Noopii: The eco-nappy changing the world “one baby bottom at a time”